The Independent Games Wiki
Register
Don't have an account?
Sign In
Advertisement
in: Games, Stubs, 1998 games,
and 2 more

Tower of the Sorcerer

Tower of the Sorcerer is really a non-linear puzzle game disguised as an RPG.

"It may seem that the story is usual. Brave man is trying to save princess caught in the tower. But this is not so usual and normal story. Well, this story is even not from this game. Why? Check this while playing."

Tower of the Sorcerer appears to be RPG-style; you have attack strength, defence strength, and a health bar, and so do all the monsters. You can increase your health (without limit) by drinking potions, and increase your attack and defence strength by collecting crystals and improved equipment, as well as by donating gold to the altars on various floors. However, since the combat is completely deterministic, it is actually a puzzle.

When you engage a monster, you take turns hitting each other until one falls (the player goes first, except during some of the boss fights). There is no random element; the amount of damage is simply attack strength minus defence strength. It is a normal occurrence for one to have insufficient attack power to hurt the other.

Thus, your strategy is based on choosing the order of your battles so as to progress through the levels, conserve your health (and keys), and maximise your attack and defence strength. To assist in this, you are given the Orb of the Hero, which shows you the capabilities of the monsters on the current floor and the amount of damage that each would inflict if you were to challenge them. Your exact path is then up to you. 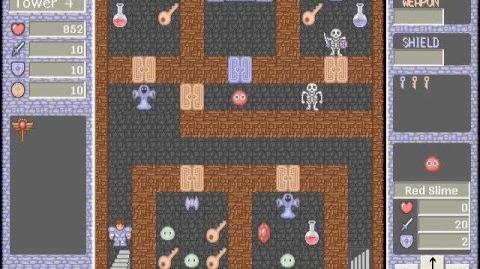