Monaco is a 4 player co-op top down stealth/heist game where the goal is to infiltrate buildings and get out with as much cash as possible. Will have local, LAN and online multiplay.

The game was originally made as a side/relax project after working on Venture Dinosauria for over a year and not feeling like it was going anywhere. 6 weeks later, Andy submitted it to the IGF after it turned out to be great fun. It ended up winning the Grand Prize. 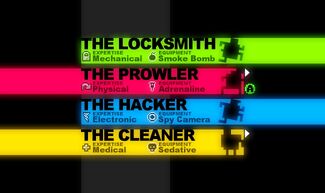 The game lets you choose between 8 of classes, each with their own advantages.

]
Retrieved from "https://tig.fandom.com/wiki/Monaco?oldid=18728"
Community content is available under CC-BY-SA unless otherwise noted.